Home/Silurian Bedrock Mapping and WI NR 151 Infield Bedrock Compliance/Summary of the HYDROGEOLOGICAL CHARACTERIZATION OF THE TOWN OF LINCOLN, KEWAUNEE COUNTY, WISCONSIN
Previous Next

This Kewaunee case history is well thought out and implemented. It focuses on thirty-six square miles located in the Town of Lincoln, Kewaunee County, Wisconsin. The report, found on the internet, is called the Hydrogeological characterization of the Town of Lincoln, Kewaunee County, Wisconsin by Michael J. Parsen, Stephen W. Mauel, Carolyn M. Streiff, Wisconsin Geological and Natural History Survey Open-File Report 2017-05. “The study was commissioned by the Town of Lincoln in 2015 and the Wisconsin Geological and Natural History Survey (WGNHS) completed the project in 2017. The study incorporated both existing and newly obtained data sets and employed a number of techniques to estimate and map depth to bedrock, water-table elevation, depth to groundwater, groundwater recharge, groundwater contaminant susceptibility, catchment basins, and closed topographic depressions.” It is well worth reading for those of you concerned about the susceptibility of groundwater contamination from agricultural facilities.

The hydrogeologic characterization generated eight maps: site map, depth to bedrock, input data sets for depth-to-bedrock map, water-table elevation, depth to water table, groundwater recharge, groundwater contaminant susceptibility, and catchments and closed depressions. Each map contributes to the hydrogeological characterization. For each map, there is a section on what the map is for, what does the map show, how was the map constructed, why is the map important, and what are the limitations. Early on, the study points out that it is an “informational and educational tool.” In addition, it mentions “The maps should not be used as the sole criterion for making siting or land-use decisions. Site-specific decisions should always be made using site-specific information.” I believe this study demonstrates the level of detail or resolution available from current data, which supplements a site-specific program.

Summary of the hydrogeological characterization for Town of Lincoln, Kewaunee Co, WI

The study integrated five hundred to a thousand data points (my best estimate). It determined that areas with shallow bedrock have shallow groundwater and elevated rates of recharge. Given that Silurian dolomite is well known for its voids and fractures, water flows through it with less difficulty than competent rock or clay. Thus, areas with shallow Silurian dolomite bedrock were generally ranked as the most susceptible for groundwater contamination. This correlation supports the importance of a site-specific infield bedrock verification program. While the study did not focus on only the top twenty feet, the conclusions support NR 151’s approach and the need for on-site programs that provide greater horizontal and vertical detail.

What are some limitations related to bedrock mapping in Kewaunee Co.

Part of the analysis of the hydrogeologic characterization was to discuss limitations. The limitations ranged from the resolution of the available data, the accuracy of relocating existing data, and the discrepancies with methodology used for describing local geology. Also, one discovers that using available data is problematic and is often more heavily weighted towards more developed areas. Thus, currently available maps frequently interpolate the results over much larger areas in less developed areas, which includes rural farming and agricultural facilities.

The amount of data available controls the level of detail for presentation in a map. With current technology, computers are capable of creating maps with an excess amount of detail. The detail or lack of detail may or may not be warranted. The best maps have an ample amount of data points spaced close enough together to map the expected level of detail. The hydrogeologic characterization is very transparent with its findings and discusses the limitations of results across areas with little or no data. 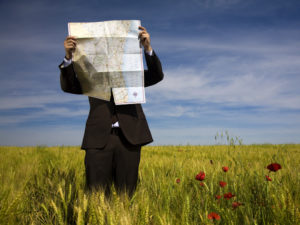 Drillers logs from the state database are difficult to place and often too few for a site specific study.

Problems with locating existing data on a map in Kewaunee Co.

The ability to accurately place existing data has huge ramifications. One may have information of enormous value. Knowing where it came from on a map is dependent on how its use. For example, what if I knew of a chest of gold that was stolen in 1897 during the Klondike gold rush and I was able to find details in the local newspapers to confirm it. There is no doubt it is worth millions today. The robbers followed the Yukon River but drowned during their getaway. Their bodies were found floating down the river a day after the robbery. Wow! The problem is not if the chest of gold existed, it is now how to find it. I know it is near the Yukon River and possibly in it. However it is nearly impossible to find again.

On the other hand, if one of the robbers had a map describing in detail the landmarks on how to find where they buried the chest before drowning, I would be rich. Except, I am likely too late because the guy who found the map is now rich. To put it another way, mapping bedrock and soils is only as good as the location of the information used to make the map. In the study, the location of well construction reports were not very accurate and frequently off by hundreds or possibly thousands of feet. After all, trying to map areas that are tens of acres in size require placement of the data within tens of feet or less. 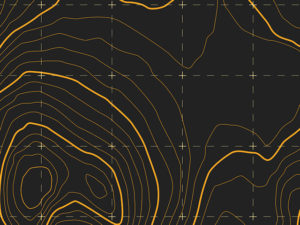 Contouring data takes experience. To repeat, computers today can generate artifacts and great detail. One method of minimizing these problems is to use large contour intervals. Large contour intervals map gross features and are less sensitive to spatial inaccuracies. This hydrogeological characterization understood these concerns. The contour intervals used in their maps reflect the location and accuracy of the data. Unlike this study, which used a twenty-foot contour interval, site-specific studies for farmers and agricultural facilities need one foot accuracy. NR 151 breaks downs its classifications using intervals of 0 to 2 feet, 2 to 3 feet, 3 to 5 feet, 5 to 20 feet, and greater than 20 feet. Thus, site-specific mapping, geophysical methods, and drilling operations are more demanding than presented in this study.

I feel there is no better way of summing this up then quoting the report. It states, “While the depth-to-bedrock interpretation was made by incorporating each of the above referenced datasets, it is important to understand that the process is ultimately subjective, as interpretations need to be made in situations where datasets may be contradictory, or simply very few data exist. Examples of this include situations where lithological descriptions for closely neighboring wells conflict, or a driller’s description as “gravel and stones” could in fact be competent bedrock that is simply broken up during drilling. In other instances, when little to no depth-to-bedrock point data are available, interpretations are based on a combination of land elevation data, soil maps, geologic maps, or simply the geometry of stream channels.” 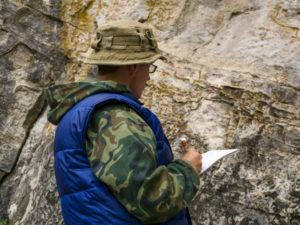 Drillers, geologists, and engineers have different methods of identifying top of bedrock.

How can geophysical methods assist.

At some locations, the study implemented Horizontal-to-vertical Spectral Ratio (HVSR) Passive Seismic using a Tromino 3G Digital Seismometer, which is more straightfoward and easier to implement than other geophysical methods. The approach is generally intended for deeper surveys where bedrock is much greater than twenty feet deep. For mapping bedrock less than twenty feet, I feel one would benefit from a multi-channel analysis of surface waves ( MASW ) survey or a refraction seismic survey. Though refraction methods are common, experts believe MASW may offer better resolution with fewer limitations than seismic refraction.

The study demonstrated that electrical resistivity imaging yielded desirable results. The equipment responded well. However, the report mentioned the depth of investigation as a limitation. In my opinion, the electrical resistivity system limited the depth of investigation. Personally, I suggest using a minimum of 84 electrodes with a spacing optimized for the desired depth of investigation. Cables with 5.25-meter electrode spacings are capable of reaching depths in excess of two hundred feet. Another limitation discussed was planting electrodes in gravel material. By all means, driving electrodes is difficult in gravel. Drilling holes with a battery operated drill and adding some water to reduce contact resistance makes the job a whole lot easier.

As mentioned, the Geonics EM31 worked well for estimating depth to rock. Though the study did not list any limitations, the instrument is not lightweight and assumes the soils are fairly homogeneous. In areas with very low apparent conductivities, ground penetrating radar or GPR mapped the bedrock surface. Though swampy areas or a thick gravel base under roadways were a possible problem for GPR, I do not foresee this as a problem in the future. Roadways are less of an issue since an operator would likely conduct GPR surveys for agricultural facilities across a field. In addition, swampy areas and wetlands are avoided in an infield bedrock verification study because they are not available to us in a nutrient management program. Finally, new GPR technology, was not available during this investigation, greatly increases the depth of investigation. Geophysical Services LLC has this unit available and has seen depths of penetration nearly twice as deep as previous GPR systems.